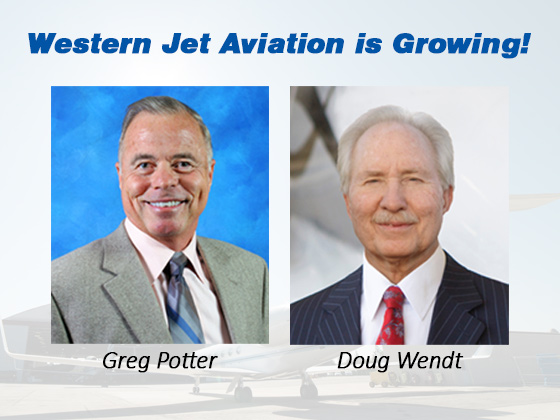 Western Jet Aviation, located in Southern California (KVNY) is proud to announce the addition of Greg Potter and Doug Wendt. Well-known and respected in the industry, Greg and Doug bring over eight decades of invaluable knowledge and experience from their tenures at Collins Aerospace, Universal Avionics, Gulfstream Aerospace and Honeywell Aerospace. Their perspective as pilots combined with their extensive backgrounds in manufacturing, operations and field support, afford Greg and Doug a unique fluency in all aspects of aftermarket services.

A native Californian, Greg Potter graduated from Cal Poly San Luis Obispo with a degree in Business Administration and Military Science. After serving in the US Army flying UH-1H helicopters, Greg worked at Hughes Helicopters and Goodyear Aerospace for six years before being recruited by Collins Avionics, where he rose to North American Sales Director. After 25 years with Collins Avionics, Greg was tapped by Universal Avionics to take over as Western Region Sales manager, where he spent almost ten years. Greg met his wife, Laverne, while they were both in the Army and have since settled back in Southern California where they enjoy boating and spending time with family.

A graduate of Arizona State University with a degree in Aeronautical Engineering, Doug Wendt joined Cessna Aircraft Company as a Dynamics Engineer. After working for Cessna, Doug spent twenty-two years with Gulfstream Aerospace as Product Support Manager. In this role, Doug covered the Pacific Rim in Product Support attending Operator’s Conferences and assisting customers in Japan, Australia and worldwide. Doug is at ease working with large and small fleet operators alike, assisting with application of mandates and emerging technologies. Doug and his wife Nancy live in the Phoenix area where he enjoys swimming when it’s too hot for golf. They will be celebrating their 30th wedding anniversary this fall.

Founded in 1999, Western Jet Aviation is the world’s largest independently owned business jet maintenance facility specializing in Gulfstream® type aircraft with over 120,000 square feet of hangar, shop and office space on 10 acres and a service team boasting a combined 100 years of expertise. Western Jet Aviation is a FAA Certified Repair Station offering tip-to-tail maintenance and avionics support for G200 through G650. From 96-month inspections and complete cabin renovations to quick-turn engine changes and in-flight troubleshooting, Western Jet’s highly skilled technicians are equipped to get the job done right and on schedule reducing downtime and expense.