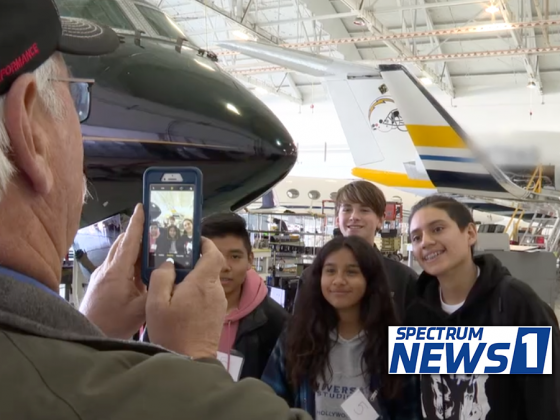 When it comes to aviation education, pilots tend to get all the attention. The Van Nuys Airport recently hosted several high school students to show them the technical side of the aviation industry.

Karyme Garcia is a 10th grader at Van Nuys High School. She was the only girl in the group that visited Western Jet Aviation from the school’s Automotive Program.

"I find it very interesting on how you can take a piece of metal or like everything, join them up together and fly it into the air," she said.

But she doesn’t want to fly the plane. She’s more interested in the engineering, so she can design cars.

"My dad actually took me to all the car shows and everything, like drag races from NHRA for hot rods," Karyme said.

As a young woman interested in a field that has been predominantly male, Karyme says, "people underestimate you, saying 'she's not going to be that experienced or that smart.'"

She and her classmate, Chad Agruso, were among only three students selected in Southern California to attend the National Flight Academy last summer in Florida.

"It connects the world because without airplanes, you couldn’t travel as fast or go places," Chad said.

Their teacher, Chad’s father, focuses on engineering principles that could lead them down a variety of career paths.

"There’s only seven automotive programs left in the Los Angeles Unified School District and within the next few years, two or three of them will be retiring," Agruso said.

Karyme was fascinated by the electronics inside the plane.

"If you like working on cars, you’ll love working on aircraft," one of the avionics technicians said.

The students even inspired some friendly rivalry among the workers.

But no matter what direction the students end up choosing, the idea is to make sure they know all their options.

"Between the parts guys and the people who work on the engines and the interior and electrical, it’s just a huge career," Chad said.

And whether it's cars or airplanes, Karyme is determined to follow her passion.

"Make sure that you give it your best and that you try as hard as you can to get to the place where you want to be," she said.

Her future career may be on the ground, but her aspirations are sky high.